This past Saturday I stumbled upon the BEST yard sale. You know its good when you arrive and find, right away, vintage cocktail glasses and a woven leather belt in your size. I acquired numerous items at this sale but NONE compared to the antique Wagner Ware cast iron Bundt Cake pan. As soon as I picked it up (all 9 pounds of it) I knew that what I held in my hands was not only an amazing piece of baking history but personal history as well. Sure enough two seconds later the woman who was hosting the sale approached me. It was her Grandmothers. And that she had baked pound cakes in it for decades. I asked her why she was selling such a beautiful artifact. She replied that she did not use it anymore and that her husband is diabetic. She continued on about her Grandmother, who had raised her in Baltimore, and how important family is. She asked 10 dollars for the pan, I did not bargain with her and reassured her that it would be put to good use and well taken care of.
My beautiful Bundt... 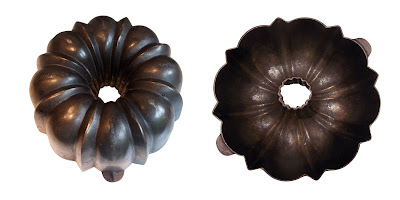 Now there is an interesting twist to this story. First a brief history...The bundt pan is a variation on ceramic cake forms used in Germany, Austria and Hungary. Bundt cake pans found their way into our baked goods vernacular though a man by the name of David Dalquist, founder of Nordic Ware in Minnesota; who upon request by a group of Zionist women in Minneapolis was asked to manufacture a bundt cake pan. Dalquist modified the heavy ceramic or cast iron pans and incorporated the fluted Scandinavian designs to make the pan from aluminum. He then trademarked the Bundt pan in 1950. After luke warm sales the Bundt cake came into full American culinary view after a Bundt cake took second prize at a Pillsbury sponsored baking contest in 1966. Bundts surpassed Jell-O molds to become the best selling pan in the United States, more than 50 million have been sold by the Nordic Ware company. Side note: My Grandfather worked at Nordic Ware for a short time and my Mother was employed as a free-lance graphic designer for Pillsbury.


At home I already had dough rising for Pan co'Santi for a potluck that evening (recipe to follow). But I cold not resist my beautiful new baking accessory and immediately started searching for a Bundt cake recipe. I found one for a Yogurt Bundt cake in the Joy of Cooking revised edition (1997). I adapted it only slightly. I added fresh organic blueberries, used organic sugar and used eggs from our CSA share. I then dressed my Blueberry Bundt with a very fragrant Orange-Rum glaze. Pure Gloriousness. The cake did not make it to the Potluck, I just couldn't bring myself to relinquish my first Bundt cake to strangers.

Have all ingredients at room temperature. Preheat the oven to 350. Grease and flour one 6-cup Bundt pan.
Sift together:
2 1/4 cups whole wheat pastry flour
1 teaspoon baking powder (make sure its not expired!)
1/2 teaspoon baking soda
1/2 teaspoon salt
In a large bowl, beat until creamy, about 30 seconds:
5 tablespoons unsalted butter
Gradually add and beat on high speed until lightened in color and texture, 2 to 3 minutes:
1 cup sugar
Whisk together, then gradually beat in:
1 large egg
2 large egg whites
1 teaspoon vanilla
Add the flour mixture in 3 parts, alternating with, in 2 parts:
1 cup yogurt (non-fat, low-fat or full-fat)
Beating on low speed until smooth and scraping the sides of the bowl as necessary. When mixed fold in 2 cups fresh blueberries (washed and picked over for stems). Scrape the batter into the Bundt and spread evenly. Bake until a toothpick inserted into the center comes out clean, 25-40 minutes in a Bundt pan (depending on if yours is aluminum or cast iron)Let cool in pan for 10 minutes. Tap the sides of the Bundt pan against the counter to loosen the cake. Invert the cake and let cool on a rack or a pretty plate. 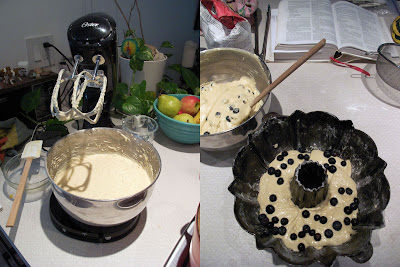 ps you don't have to have a bundt cake for this recipe, any old cake pan will do, just watch your baking times...
Orange-Rum Glaze
Stir together briskly until thoroughly combined:
1 cup powdered sugar, sifted if lumpy
2 to 3 tablespoons rum
1/2 teaspoons orange zest
Drizzle over cake while warm....dust with powdered sugar right before serving
Posted by Unknown at 11:22 AM