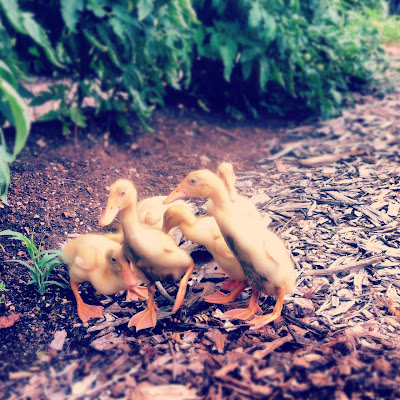 Everyday they grow. It's crazy. And every morning when they see me they expect a handful of fresh greens. They are becoming less skittish and more confident in their environment. Their feathers are starting to come in and their chirps are becoming more quack-like. The Indian Runners have entered adolescence.
On Sunday we took them to the Eric Waller Community Garden for their first visit to their future home. They immediately began to forage for bugs in the dirt and took to being in the garden very naturally. I quacked and they followed me around the bean rows; it was so cute it nearly broke my heart. They then went for a swim in the kiddie pool and I feed them the dreaded harlequin bug which they gobbled up with gusto. They won't be ready to be in the garden full time until they have all their feathers, which may be a while. However they soon will be too big to stay at our house which will mean driving them up to the garden in the morning and retrieving them at dusk; before the foxes, raccoons and other mystery predators come out to hunt. BUT. I am worried about them, already losing sleep over them. I am not sure what I expected from raising these amazing creatures but I am definitely attached and will be very heartbroken if anything happens to them. Tonight we begin building the duck house at the garden. If it were up to me I would be building Fort Knox but we are only a small community vegetable garden with limited funds and time...The first night they spend at the garden I just may camp out because I will not be getting ANY sleep at home. 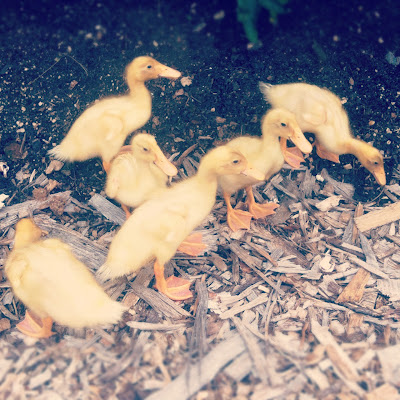 If anyone out there in internet-landia has any advice or suggestions for deterring foxes (just short of fox hunting) I would greatly appreciate the message.
XOMC
Posted by Unknown at 7:54 AM