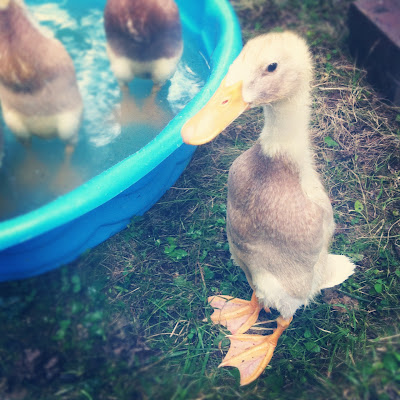 One week ago today we had a scare. I was already nervous to leave them for the weekend and had been running around all week coordinating with folks to make sure that they were cared for. About 15 minutes before we were slatted to leave for NYC I went to check on the ducks and what I found was a dying duck. She was breathing hard and twitching, her neck flopped down, eyes closed; belly up. I gently picked her up and she responded by freaking out and squawking, immediately we placed her in the box with burlap we use to transport them. Shen went right back into her "coma", belly up, neck floppy, eyes closed. Quickly we tried to google search all her symptoms. There is not a whole lot of info out there for ducks, but the first thing I read was sugar water, get them to drink! So I whipped up some sugar water and called my duck gurus. Kirsten and Jason have been raising ducks for a long time; Kirsten ironically was driving in upstate New York but Jason was at the record store so I called him. He was so helpful, hopeful and full of great advice, stories and general support. He said the best thing to do is to be with her and that anything could happen. Of course we stayed with her. Shane rubbed her belly and I kept dripping sugar water across her bill. We did this for about 45 minutes, she was unresponsive the entire time. Then...she pooped. Then she moved. I kept up with the sugar water and could feel her sucking it through her bill off my finger. We kept doing this. Then she would peck the side of the box, looking for food. I had read a while ago that you should give a sick duck hard boiled egg yolk. We just happened to have one so Shane prepped a mash for her. While he was doing that she went from belly up to on her belly. I dipped her bill in the sugar water and she started to drink, then peck for food so I added some dry food and she went for it! Then the yolk and she gobbled it down voraciously. We could not believe it. She was coming back. Then her eyes started to open and she kept eating and drinking. After about an hour she was on her feet and chirping to get back to her buddies. We gave her a quick bath and placed her back with her flock. We named her Resurrection or Ressie for short. 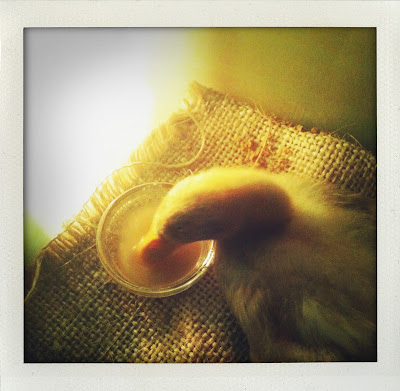 The crazy thing about this situation is that we have no clue what happened. Perhaps she ate something strange in the yard? Hardware Disease was a possibility; when they ingest a metal object. Maybe she had a seizure? Who knows. I do know though that our constant presence with her was a huge part of her surviving. Now a week later you would be hard pressed to tell that anything even happened. And since last week they have grown dramatically! This past Wednesday was their one month birthday and since two days ago they have become ducks. Quacking, moving like ducks and wanting to be outside. 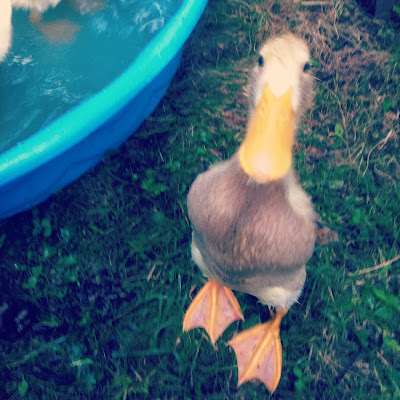 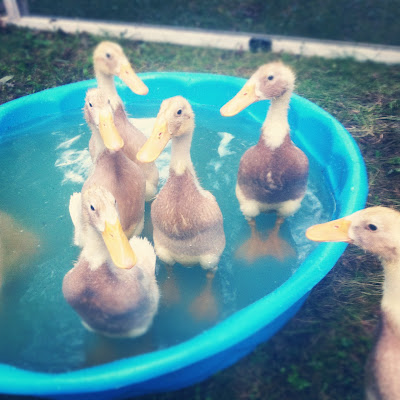