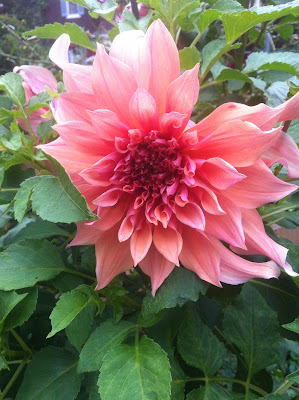 The other evening I made the first soup of the fall season. Every early autumn I get these flashes of foods that I don't crave in the summertime; soup and fresh baked bread. Must be the hibernating creature in me coming out. We had two Butternut squashes sitting on the counter from the community garden, a half can of coconut milk in the fridge and some fresh cinnamon sticks. I loosely based this creamy vegan soup off of a Rebecca Wood recipe from her cookbook by adding the coconut milk, omitting the carrot and celery and using coconut oil. The result was the creamiest most perfect balance of warming spices and sweetness I have ever had in a butternut squash soup. And the best part was it took no time to throw together making this an easy weeknight dinner with leftovers for the next night. Or double this and freeze it!

In a large pot melt the coconut oil over medium heat. Then add the cinnamon stick and swirl it around until it becomes fragrant, about 1 minute. Add your ginger and saute for another minute, next add the chopped onion and saute until the onions are translucent. Add the squash and stir the mixture well. Cover, stirring occasionally for 10-15 minutes, or until the squash flesh and skin looks softened. Add the curry powder and stir well to combine, let rest for 1 minute. Then add the vegetable broth and coconut milk, you want the vegetables to be submerged but not totally covered. Bring to a boil then turn the heat down to low and let it simmer, covered for 20 minutes.  Remove from the heat, remove the cinnamon stick and blend with a hand held blender or transfer to a blender, blend until smooth. Salt and pepper to taste.

Serve with warm bread or toast and a green salad.

Enjoy!
XOMC
Posted by Unknown at 6:20 AM