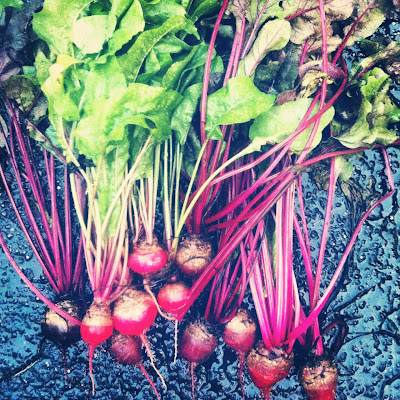 This spring I planted about 200 beet seeds. Chioggia and Detroit Reds. We ate the thinning's first followed by roasting the baby beets, then we boiled and skinned the big beets for salads and tasty snacks when they were at their peak. This past weekend I pulled the rest out to make a Spicy-Sweet Beet Relish ferment. Not really having a game plan other then the fact I had about 8 pounds of beets to use up and about a pound and a half of hot peppers. With those two as my base I decided to go for it...Now one interesting thing happened while I was prepping this ferment. I also had a hot water bath rolling for some pints of tomatoes and a pint of tomato juice left over from the canning workshop the day before. As I was putting the pints into the bath I stopped before putting the tomato juice in. It was giving off the recognizable sound of a fermented "hiss". Sure enough I opened it up and it was bubble-city. I took a sip and OMG! I just made tomato soda. No way was that going into hot water! It tasted SO GOOD!!! So I decided I would add it to my Spicy-Sweet Beet Relish to give it a sweet kick and jump start the ferment.

You will need: about 6-8 pounds of beets, boiled with the skins removed, allow to cool and chop into bite sized pieces. Two apples, cored and chopped to the same size as the beets. Three hot peppers, sliced into rings, seeds removed and toasted in a hot skillet until slightly charred. Remove from heat, cool and chop finely. Optional: a half cup of red grapes (I used organic seedless since they are in season right now) cut into quarters. Combine all into a large bowl with about a teaspoon of kosher salt. Mix and beat them around a bit until they start to give up some of their own juices. Then pack it into your jar, pack a bit press down, pack in more and press down, do this until you are about an inch and a half from the top. The goal is to remove as much of the air as you can and to cover the mixture with its own juices to create the anaerobic environment for the good bacteria to take over. Once it is packed you can finish it off with a small bit of salted water or fermented tomato soda, leave about an inch at the top. Cover with a lid. Set your ferment in a bowl to collect the juices that will inevitably pour out once the ferment gets to bubbling. Enjoy after the first three days then transfer to the fridge or cool cellar to store. Make sure you date it! This ferment tasted like magic after about 36 hours. Try it with a roasted meat dish or with fish. Or on its own!

How to make Tomato Soda: Juice 6 tomatoes, remove the seeds, pour into a jar with a lid, let it sit out for 24 hours, after that time it should be fizzy and ready to drink or use.

You will need: One large eggplant, cut up into bite sized pieces, 2 leeks washed well and sliced into thin rings (try to use as much of the leek as possible, greens too!), a medium sized bunch of Swiss Chard chopped into small pieces, stems too, 2 medium sized peppers chopped (I used 3 small chocolate peppers and one green pepper), combine into a large bowl with 2 teaspoons of kosher salt, mix and beat up until the vegetables give up their juices. Add about 1 teaspoon of caraway seeds to the mix. Stuff and pack the vegetables into your jar until the juices cover the vegetables. Then slice about 3/4 quarts of 1 medium sized cucumber and layer them over your vegetables pushing them down to weight the ferment when you have used up all the slices take the end piece place it in the middle and close up your ferment. Set your jar in a dish to catch the overflow of liquid. Taste at the three day point. You can move it to the fridge or keep it on the counter to eat from, remembering to transfer into subsequently smaller jars to keep the air from ruining it. 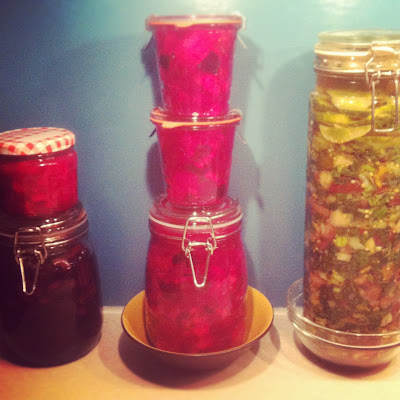 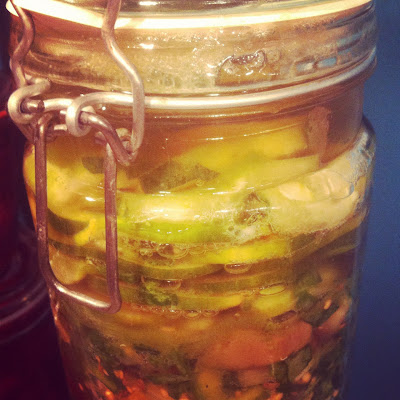